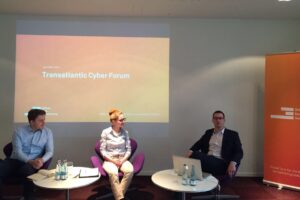 Cyber Security has been an increasingly important issue in the past. Debates about the topic, however, often ignore the international component. How can states benefit from international cooperation to combat cyber-crime while at the same maintain a high level of data protection? What are the advantages of international cyber security cooperation, and which challenges have to be met?
Our regional chapter in Berlin / Brandenburg visited the Stiftung Neue Verantwortung and spoke with Dr. Sven Herpig, project director of the “Transatlantic Cyber Forum”.
The “Transatlantic Cyber Forum” works with experts from Germany and the U.S. and publishes several kinds of output, such as policy papers and articles. Workshops are going to bring these experts together to approach the topic of cyber security from a specifically transatlantic perspective.
Germany was better off than most people think, said Dr. Herpig. He added, however, that the work of the cyber security experts in the U.S. was supported by a much more sophisticated infrastructure than in Germany. Both countries needed to raise awareness about the correlation between IT security and public security.
The Q&A session was dominated by discussions about the balancing between security and privacy. The audience brought up the attack on the DNC during the 2016 election campaign as well as the legal fight between apple and the FBI, which centered around the data on the iPhone of the San Bernadino shooter.
The event was co-organized by Polis180. We’d like to thank Dr. Herpig for the comprehensive insights as well as the audience for the lively discussion.