More than forty members of the Young Transatlantic Initiative (YTI) attended the annual convention which took place right outside Berlin in Oranienburg on the weekend between June 9 and June 11, 2017. Besides talks and ideas on how to deepen transatlantic relations in tumultuous times, the election of a new board formed the key event of the convivial assembly. 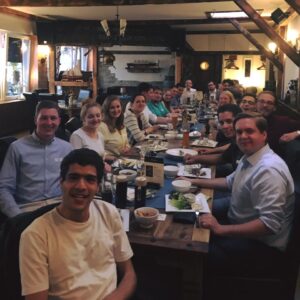 Many of the members – among them especially the ones with a longer route – met for dinner on Friday night already. This meant an opportunity to make new friends and to spend an evening among kindred spirits. Oranienburg’s calm was countered by a wonderful atmosphere that made clear already on the evening before the convention that, besides work done together, fun would not fall short.
The day of the convention started early – not only was there a revised version of the bylaws, there were elections to the board as well. The unanimously passed revision’s objective is the preparation of the registration of the non-profit status of our Initiative. In the following talk, the acting board consisting of Messrs. Jonas Emmerich, David Stock, Tim Segler, Mirko Vossen, and Robin Arens were given thanks by the members present for their work done over the last years. During Mr. Emmerich’s period of administration, the Initiative grew significantly and increased its social media appearance.
Mr. Christian Soeder and Mr. Lukas Posch stood for election to succeed Mr. Emmerich in the role of the Initiative’s president. The members’ vote saw Mr. Posch elected as president, he will be joined by the new members of the board, Ms. Chantal Austgen, and Ms. Inger-Luise Heilmann. Mr. Vossen and Mr. Arens will remain vice president and treasurer, respectively. May they do well in their new tasks!

Following the election process, the members’ discussion indicated that the new board will have adequate opportunities to show their activity as it became clear that especially the last months’ events led to our work on behalf of the transatlantic partnership becoming increasingly confronted with lowered understanding. To face this problem, the new board stated their willingness to increase the number of events organized in cooperation with the regional groups.
Before the official part of the convention came to a close, members were interestedly listening to Mr. Dimitrij Kwascha talking about his studies in California and his impressions of the U.S. startup culture. Following the talk, the group headed for Berlin where tables were already prepared in a downtown brewery.
The new board met as early as Sunday morning to set priorities that will be worked on over the coming weeks and months. We are convinced that, at the task-filled list’s end, there is an Initiative waiting which encourages its members to participate even stronger and which shows that the German-American partnership is exceptional. Exceptional, and existing on so many more layers than just the political.
We thank all participants and the convention’s organizational committee which consisted of Ms. Anna Lehné, Ms. Chantal Austgen, Mr. Sven Winter and Mr. Lukas Posch. See you next time!