The world order is facing major changes and factors once considered constant disappear. The Munich Security Conference, bringing more than 500 deciders, experts and observers together in its 54th year at the Bavarian state capital’s ‘Bayerischer Hof’ hotel, forms an exception in this regard. In fact, the “end of history”, considered near some years ago, seems to be as far away as in the 1980s.

Smoldering conflicts such as the one between Russia on one side and the United States and Europe on the other side are being led in many ways. The conflict characterized by sanctions is to be considered an exception to the rule, though – instead, open combat plays the dominant role in disputes within and between nations.

More than a dozen members of the Young Transatlantic Initiative thus decided to participate in the Initiative’s program within the 2018 MSC’s framework. While last year’s program was characterized especially by background talks on geopolitics and economic cooperation, the focus has been set more concretely in 2018.

Public Side Event in Cooperation with the Munich Security Conference 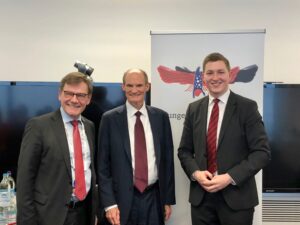 For the first time, the Initiative held a public side event in official cooperation with the Munich Security Conference. Together with Johann Wadephul PhD, Deputy Chairman of the CDU/CSU Bundestag caucus responsible for foreign and defense affairs, and Bruce McConnell, Global Vice President of EastWest Institute and former Deputy Under Secretary at the Department of Homeland Security, the audience discussed the future of transatlantic cooperation presented by Lukas Posch, President of the Young Transatlantic Initiative. The talk was live-streamed over the Internet helped gain additional members of the audience as well as interest in the Initiative.

Besides the public event held on Saturday, the participants had the opportunity to attend a background talk with the publicist and former editor-in-chief of Wirtschaftswoche Roland Tichy. Tichy’s viewpoints towards German politics came across large response and led to an animated discussion about topics such as the Federal Republic’s role within the European Union.

In addition to the talks hosted by the Young Transatlantic Initiative, members participated in events by the Munich Security Conference, German Atlantic Treaty Association, Hanns Seidel Foundation, University of the Federal Armed Forces Munich and the Young Forum of the Foreign Policy Association.

With the security conference passed, the issues of the present remain unsolved – still, the dialogue between deciders indicates that encounters are the first step towards détente. In the coming year, the Young Transatlantic Initiative will host another event weekend in the Munich Security Conference’s framework and, thus, continue the young tradition – this encompasses the growing size of events as well. Are you interested in arranging events with us? We’re looking forward to your interest!

We cordially express our thanks to Amerikahaus München e.V. as well as Osborne Clarke for making it possible to use the association’s and firm’s spaces respectively. Furthermore, we would like to thank our cooperation partners who have made it possible for our members to participate thanks to generous attendance contingents.