Having been invited by the Institute for Canadian Citizenship (ICC), several members of the Young Transatlantic Initiative (YTI / IjT) attended the first #6DegreesBRLN event on November 12, 2018. We got to know the ICC throughout 2018 – during our annual Study Trip last September, we were given the opportunity to see the ICC’s Toronto office where we were given first-hand information on both the concept and organizational details of #6Degrees, an event series, by ICC staff.

Thus, we were aware of the setting that #6Degrees events are placed into – experiencing the event, however, is much more impressive. Participants get the impression that the 360° stage invites every audience member to interact. The presence of various mobile mics emphasized this impression. A high number of those present seized the opportunity to actively participate in the discussions held, rendering nearly all attendants active participants.

Given the fact that it was a very diverse audience that saw many attendants finish distant journeys at the Barenboim-Said Academy, #6DegreesBRLN continuously gained depth and detail. Several times the various speakers came back to audience questions or had further questions for audience members, thereby enabling attendants to influence the event by shifting the focus to topics of particular interest.

Still, the inevitable question posed to YTI members prior to the event was what could justify spending a whole day that would otherwise constitute the beginning of a work or university week getting informed on an inclusive society by a Canadian organization.

In his research, Phil Triadafilopoulos (University of Toronto – Scarborough) comes back to the same conclusion over and over again: Canada today is what Germany will be in 50 years. To many of those who have visited Canada already, this thought may not seem convincing, especially given a comparison of the infrastructure and size of these countries. Those who not only look at economic but rather at social factors will see that this theory is far from being outlandish. Canada has been and is still a country depending on migration.

Many observers state the same about Germany where a society is challenged with integrating a significant number of migrants – regardless of whether or not their presence in Germany is supposed to be permanent. Taking advantage of learning about the “Canadian way” of handling migration is, thus, a smart decision. 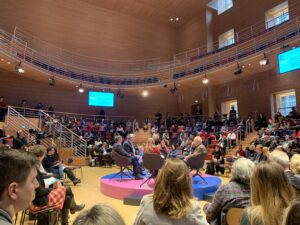 For this reason, #6Degrees’ agenda in Berlin was ideal. A possible path from “where we stand” to “where we go” was presented and “next steps” were discussed. Given the number of internationally well-known expert speakers such as Ai Weiwei, Bernhard Schlink, or Adrienne Clarkson who participated in the event, the content of individual panels was discussed on a very adept level, rendering the event valuable for every participant.

All these panels made clear that the German society has already started walking down the path to more inclusivity and integration. Still, the path is long and no halfway point has been passed by yet. That shows that an inclusive society is much less of an utopian dream than it is hard work.

Within the academy, discussions were held on a rather abstract and scientific level. That being so, best practice examples were discussed outside the official talks only. This might, however, be due to the duration of the event. While #6Degrees in Toronto is held annually over the course of three days, the Berlin version was restricted to one day so far.

At the same time, even the one-day format carries and unfolds a lot of potential for future events of this kind in Germany and Europe as a whole – an indicator for this is the very high number of participants who decided to join the interactive discussions. These discussions could prove valuable within the German society. We are looking forward to another day of #6DegreesBRLN next year in order to participate once more in a format that continues dialogues between Germany and Canada, but also within Germany.