Twenty-five participants. Four days. Three side events within the framework of the Munich Security Conference (MSC). As our Young Transatlantic Initiative entered into its fourth round of hosting a program in the course of the probably most important gathering of security experts world-wide, not only did we join forces with the Munich Security Conference Foundation in many ways for the first time, we also saw more participants than ever before. With three high-level panel events around the topics of NATO Defense Contributions: Is Germany Stepping Up?, Digital Diplomacy – A Canadian Perspective as well as Germany and the UNSC: More Than Just Good Intentions?, we enabled members and the general public to find out more about current affairs of transatlantic importance. In addition, our members were able to participate in several events hosted by partner organizations.

Who Will Pick up the Pieces? – Three in-depth discussions 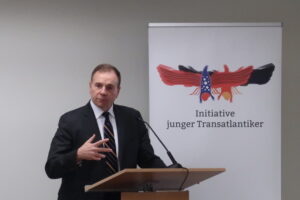 This year’s security conference was centered around the possible failure of the system of multilateralism – thus, “The Great Puzzle: Who will pick up the pieces?” may very well be deemed a fitting question. Our events served its part in solving this question. At the Office of the Permanent Representative of Québec, we gathered insights into the digitalization of international relations. Together with Florian Kling, former press officer of the German Federal Armed Forces, and Alicia Wanless, doctoral researcher at King’s College, London, we were able to discuss this topic in a relaxed atmosphere that invited participants to ask detailed questions. Which developments do happen and how do they influence digital communications? Mrs. Wanless, who is intensively researching this topic, supported her statements by showing several examples that indicated not only a change in rapidity, but also an increasing lack of diplomatic protocol. Mr. Kling gave insights from a more defense-oriented point of view pointing out the difficulty of finding appropriate answers to (intentional) fake news in digital media. Both panelists agreed that the public sector is required to step up its efforts to maintain pace with technological development – more research in digital communications is clearly necessary. 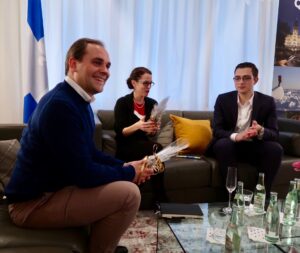 For the next two years, Germany will be a nonpermanent member of the United Nations Security Council. Still, Germany seems indecisive quite often in international affairs. Together with Tim Richter, a journalist and member of the board of the German United Nations Society, and Theresa Lütkefend, research assistant at the Global Public Policy Institute (GPPi) in Berlin, we tackled perspectives and problems that come with Germany’s temporary membership in the United Nations’ most influential body. It became clear quite quickly that Germany is highly unlikely to change its traditionally cautious course. Foreign Minister Heiko Maas already set foci – these shall be arms export control, climate change and women in conflict regions. While these topics do not trigger any surprise in many observers, they are clearly niche topics that allow for broad majorities. From our panelists’ points of view, such an agenda is workable as it plays into Germany’s strengths in development policy and sustainable development. In addition, discussing these topics in the UNSC may as well foster discussion among other UN bodies. Of course, the question of how the United Nations as a whole may be reformed was asked by several members of the audience – while there is little to no chance that any change will happen over the next years, European foreign policy may very well see changes.

More than 130 guests and a program full of variety 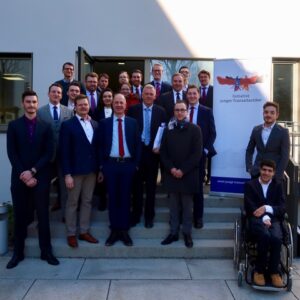 Young Transatlanticists with our NATO Panelists

While our discussions around the United Nations and digital policy served as great explorations into current affairs, our program’s main discussion was centered around German responsibility within NATO. To discuss this important question of transatlantic cooperation, we were joined by Lieutenant General (Ret.) Ben Hodges, former commanding general of the United States Army Europe, Brigadier General (Ret.) Dr. Erich Vad, former military policy adviser to the Chancellor, and Dr. Christian Mölling, Director at the German Council on Foreign Relations. While our UNSC panel saw the panelists acknowledge German security policy, our largest discussion held quite some criticism directed at Germany’s policy. Instead of debating the defense spending goal of two per cent of each NATO member’s GDP alone, participants saw a discussion that was centered around a realist approach: Germany must step up its defense efforts regardless of whether expenditure reaches 1.8%, 2.0% or any other amount as long as such increase turns the country into a capable NATO ally. Dr. Mölling and Brigadier General Dr. Vad furthermore pointed out that the German public has treated security policy as a relic of the Cold War for the last years – yet, current developments in Ukraine and Syria show that this was a fallacy. Still, Germany is a valuable ally of the United States – thus, Lieutenant General Hodges pointed out that Germany is for good reason the “most important ally of the United States”.

We look back at a very successful weekend that did not only see young transatlanticists gather – in addition to our members, we were able to welcome around 130 interested members of the public. Full of anticipation, we are looking forward to hosting our nest MSC weekend where we would like to welcome many more of you! Finally, we would like to cordially thank the Québec Government’s Representation in Munich and the Amerikahaus München – Bavarian Center for Transatlantic Relations for their great cooperation and for having allowed us to use their premises for the discussions.